To share your memory on the wall of Mr. Peter Celko, sign in using one of the following options:

Provide comfort for the family by sending flowers or planting a tree in memory of Mr. Peter Celko

Provide comfort for the family by sending flowers or planting a tree in memory of Mr. Peter Celko

On Friday November 13, 2020, Mr. Peter Celko passed away peacefully with his family by his side.

Peter was born on November 25, 1935 in Fort William, Ontario. He grew up in a hard-working Slovak-Ukrainian househ... Read More
PETER CELKO

On Friday November 13, 2020, Mr. Peter Celko passed away peacefully with his family by his side.

Peter was born on November 25, 1935 in Fort William, Ontario. He grew up in a hard-working Slovak-Ukrainian household. He learnt valuable skills helping his father build their home on Walsh street; skills he would use later in life.

As a teenager, Peter moved to Atikokan and worked at an autobody shop and mine. During this time, he enrolled in an International Correspondence course in diesel mechanics. He went on to work as a heavy equipment mechanic at Great Lakes Paper Company in Thunder Bay until his retirement in 1994.

At the age of 21, Peter purchased property at Shebandowan Lake and began building a camp all on his own. This would later become our family camp where we would spend our weekends and summers. On Fridays, mom would pack up the car and we would leave for camp as soon as dad came home from work, picking up our grandparents on the way.

In 1964, Peter married his wife, Darlene. Peter went on to build our family home in 1978 with help from his father-in-law Walter, father Steve and son Randy. Peter and Darlene enjoyed spending time with their friends. They loved to dance and were often the only couple in their group of banquet friends on the dance floor. Many summers they set out travelling in their camper with friends. Peter especially loved fishing and camping with his son Randy and best friend Peter Vangel, spending many hours at Pakashkan Lake.

Peter was extremely hard-working, loved mechanics and great with his hands. Whether he was working on vehicles, iron work, carpentry or drawing, he could do it all. He was a talented man, although he did not recognize this in himself. Peter was quiet with a dry sense of humour. He often surprised us with a good laugh.

Peter is survived by his wife Darlene, son Randy, daughter Susie (Paul), grandchildren Katherine, Stephen and grand dog Chester, who he was especially fond of. He is also survived by his twin brother Frank (Mary-Jane) as well as nieces and nephews.

Predeceased by his parents Steve and Tekla, sister Anne and infant brother Ludvig.

A private family graveside service was held in Mountainview Cemetery. Arrangements have been entrusted to the Westfort Chapel, 420 West Gore Street at James.

Thanks Dad for supporting us and working hard to make our lives better.
You will always be in our hearts.
Read Less

We encourage you to share your most beloved memories of Mr. Peter here, so that the family and other loved ones can always see it. You can upload cherished photographs, or share your favorite stories, and can even comment on those shared by others.

Plant a Tree in Memory of Mr. Peter
Plant a tree 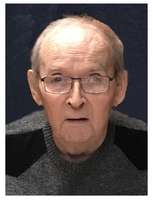