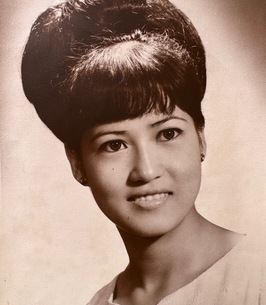 Carmelita was born on January 2, 1949 in Manila, Philippines. She immigrated to Canada in 1992 and settled down in Nipigon where she eventually met Salvatore “Sam” Scarfo and they were married on August 14, 1999. Carmelita worked as a Custodian at St. Edward's Catholic School in Nipigon for 21 years where she made close friends.

Carmelita was full of life and laughter. It was never a dull moment whenever she was around her friends and family. Her smile and contagious laughter brightened up the room. She always made sure she made you laugh even when she wasn't feeling good. She loved to sing and dance everyday and when she wasn't dancing, you would catch her in the kitchen singing her heart out while she was cooking or baking new recipes she would make for her friends and family.

She was predeceased by her beloved husband Sam (September, 2022); her parents Gregorio and Lorena; siblings Rome, Hector and Eduardo; her parents-in-law, Pietro and Filomena as well as her brother-in-law Domenico and sisters-in-law Maria Salvador, Teresa (Vittorio) Topetto and Angelina Scarfo (in infancy).

Funeral services for the late Mrs. Carmelita Scarfo will be held on Friday, November 25, 2022 with family and friends gathering in St. Dominic's Roman Catholic Church for the Funeral Mass at 10:30am, celebrated by Father Michael Mahoney. Private entombment will follow in Our Lady of Charity Mausoleum at St. Andrew's Catholic Cemetery. Visitation will be held on Thursday evening after 6:00pm in the WESTFORT CHAPEL, 420 West Gore Street at James, with Vigil Prayers offered at 7:45pm.

Should friends so desire, donations made in memory of Carmelita to Diabetes Canada would be greatly appreciated.

All rights reserved. This obituary is also archived at obittree.com